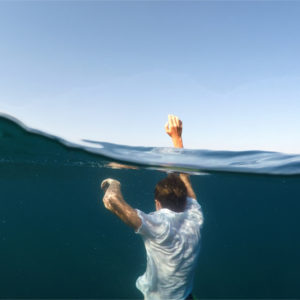 This article is by Dr. Tony Evans and published by ThinkE

One of the most unforgettable encounters the disciples had with Jesus was when He came to them in the midst of the storm. The waves buffeted their little boat, and they were fearing for their lives when Jesus appeared walking on the water. He called out to Peter to come to Him. Peter climbed out of the boat but then started sinking.

Peter called out to Jesus to save him. That had to be the shortest prayer in the history of prayers.

But the length of our prayers do not matter as much as the heart behind them.

As soon as Peter prayed it, Jesus reached out to save him. We read, “Immediately Jesus stretched out His hand and took hold of him, and said to him, ‘You of little faith, why did you doubt?’” (Matthew 14:31).

Even though Peter had seen the authority of God up close and personal, he wavered. Jesus knew his faith was enough to keep him from going under. But Peter decided to focus more on the problem than on the face of Jesus.

The difference between great faith and little faith is the object of focus. If you look at Jesus, and Him alone, your faith will be great. If you look at your circumstances, it will be small. Where you choose to focus will determine your faith. Never focus on the storm. The storm cannot save you. Always look at the One who holds the power over the storm.