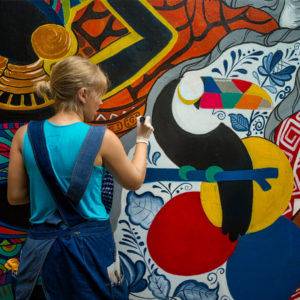 This article is by Rebecca Kelsall and published by CRU

Kelly Kruse wilted in her studio, tearful blue eyes sinking toward the floor.

She’d had a rough night amidst a rough year. The year walked her through a bout of deep depression and the night, a nightmare.

The former opera singer found solace in one of her favorite musical compositions – Brahm’s A German Requiem. Its lyrics consist completely of Scripture, beginning with “Blessed are the suffering.”

A chorus of voices booms.

As the melody about mortality wound down, Kelly heard a harmony thunder on the word “but.” The requiem quotes 1 Corinthians 15:51: “We shall not all sleep, but we shall all be changed” (italics added).

In the midst of a season of depression, Kelly had been wondering what the Lord was calling her to do, and one direction became exceedingly clear. He was calling her to paint. And her show, All Flesh is Grass, based on Brahms’ Requiem, opens in March of this year.

Kelly says her art “is the hill God’s given me on which to trumpet His grace.”

As a Christian painter, Kelly answers a call put out by Andy Crouch in his book Culture Making to neither avoid nor simply indulge in the culture around her. As a believer in Christ, she is active in creating it.

And, even if you don’t consider yourself an artist, you are called to be making culture, too.

When you think of culture …

What comes to mind?

You may think of “cultured” people who are knowledgeable about fine art. You may think about ethnicity, your family or traditions.

But Crouch, former editor of Christianity Today, argues that all of these definitions fall short. Culture is everything around us: what we eat and wear, our language, and how we see the world.

The options we’ve had

A problem arose when Christians began separating themselves from culture. Suddenly many innovations that Christians participated in – universities, charities and art – explored subjects apart from Jesus, and the church deemed them no longer sacred. Now they were  “the world.”

This problem has left its mark on believers in Jesus to this day. The following are the options most people choose when they consider their culture.

In his book, Crouch remembers friends who grew up in the church. They heard sermons on the world’s danger, but none on its delights.

“‘Holiness’ [became] avoiding cultural activities, like dancing or going to the movies,” he recalls. “Their unspoken assumption was ‘the culture’ was something distinguishable from their own daily life.”

This is a posture of condemnation, making some things “Christian” or holy, and all else “secular.” The danger in this position is that it both keeps us far from some of the world’s treasures as well as far from people the Lord loves.

The second way we position ourselves when it comes to the world is we critique or “engage” it. When we go to the movies, we distinguish the parts that honor God from the parts that don’t.

The problem with this demeanor is, we may find ourselves doing nothing but thinking.

“It is [fair] to say that evangelicalism,” Crouch comments, “still produces better art critics than artists.”

During the Jesus Movement of the 1960s, a fervent group of Christians took cultural engagement a step beyond thought and created Christian rock.

“Christian rockers couldn’t deny that the lifestyle and lyrics of rock and roll were incompatible with Christianity, but they had a … solution: change the content while adopting the form,” says Crouch.

We go to the movies. We dress like everyone else. We listen to pop music and spend too much time on social media. But the world is not left any better for it.

Crouch points out that there is a place for each of these reactions to different parts of culture (e.g., injustice is a part of culture that we are right to condemn).

It is when any of these actions becomes our predominant reaction that problems arise. Do you ever find yourself making a habit of these reactions when it comes to TV, music or other parts of culture?

Who we’re meant to be

I don’t know if I’ll ever hear a piece of music and have the same reaction Kelly did at the start of this story. But as a writer, having read explications of Genesis 1, I think my reaction comes close.

When I read the Creation story, I see God, with whom I speak daily, as a Great Artist over everything … which, at first, was nothing at all. He conjures cosmic paint and clay, and calls it light and earth and sea. He shapes and life comes to be.

And in the great crescendo of Creation (much like the “but” in Brahm’s Requiem), God makes something to look like Himself. He makes people. And they have the job to care for what God created, and to make new things, as well. Just like the one who made them.

While there is a place for condemnation, critique, copying and consumption in culture, our first job, our primary reaction, is not any of these things. Our first job is the first job given to man. We are to cultivate creation, and create more of it. We take care of the culture and make something of it.

Crouch says cultivators “tend and nourish what is best in human culture. [They] do the …  painstaking work to preserve the best of what people before us have done. [Creators are] people who dare to think and do something that has never been thought of or done before. Something that makes the world more welcoming and thrilling and beautiful.”

Crouch attests that the only way to change culture is to create more of it, and not just more, but better culture.

How should we respond?

So how do you contribute to culture, rather than dismissing it, scrutinizing it or indulging in it? Here are some practical steps:

For more on these ideas, read Andy Crouch’s Culture Making. If you are an artist of any sort interested in connecting with Cru and honing your skills, check out Cru’s partner Transform Creative.