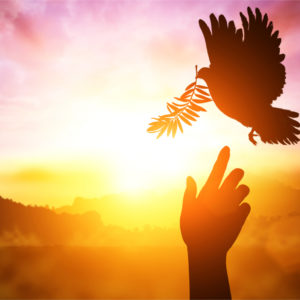 I vividly remember those words, a chapter title in Evelyn Christenson’s book What Happens When Women Pray.

Honestly, when I first read them, I was cynical. They sounded trite and naive. I arrogantly assumed that the author hadn’t struggled much in her life, or else she wouldn’t have made such a bold claim. In my mind, God was good and all-powerful, but to say that he never made mistakes had sweeping implications that seemed inconsistent with the massive evil and suffering in the world. Christenson’s statement so annoyed me I was tempted to stop reading.

As I read her book, I had just been through the fallout of a marital crisis while also pregnant with our oldest daughter. I was grateful we had put our marriage back together, but to say that God didn’t make a mistake seemed far-fetched. My life had been difficult on many fronts already. I had lived in and out of the hospital after contracting polio as an infant. I had been bullied throughout grade school. I had recently suffered three miscarriages.

I had a hard time imagining that God hadn’t made a mistake somewhere in my trials.

While I struggled to believe he had never made a mistake, I did believe that God had been in at least some of my early suffering.

“God had not made a mistake in making my son, in giving him to us for a time, and in taking him back to himself.”

When I came to Christ, even at sixteen, I was already beginning to see God’s purpose in my disability. I had happened upon John 9, where Jesus tells his disciples that the blind man’s condition was not because of any sin, but so that his life could glorify God. When I read that, I knew that God was speaking directly to me. He reassured me that my suffering had a purpose, which changed how I viewed my life and my struggles.

Still, even though I had seen God use my physical challenges for good, I doubted that principle applied to all my suffering.

What God Says About Sovereignty

Despite my skepticism, since I was leading the discussion on Christenson’s book at church, I had to keep reading it. I pored over the Bible before our meeting, asking God for wisdom and guidance, and was drawn to passages on God’s sovereignty and purpose. I grabbed a concordance and made a list of Scriptures that stuck out to me, like these:

Are not two sparrows sold for a penny? And not one of them will fall to the ground apart from your Father. But even the hairs on your head are numbered. (Matthew 10:29–30)

I know that you can do all things, and that no purpose of yours can be thwarted. (Job 42:2)

Many are the plans in the mind of a man, but it is the purpose of the Lord that will stand. (Proverbs 19:21)

I kept rereading these verses even though they made no sense to me.

Truth I Could Not Shake

As the discussion began, everyone had an opinion on the same line that had arrested me: “God never makes a mistake.” Some people decidedly disagreed. It angered them. “Of course, hard things happen in the world,” they insisted, “but we shouldn’t attribute them to God.” Others shared their painful experiences and struggles with loss.

Someone said (rather matter-of-factly), “But we know Romans 8:28 says, ‘All things work together for good, for those who love the Lord and are called according to his purpose,’ which means that God is in control of everything and will use it all for our good.” Her cool words felt more like a platitude or cliché than the truth as they hung in the air. Her detached insistence on this doctrine, apparently without sympathy or understanding, tempted me to defend the other perspective.

Yet somehow, I couldn’t do that. Somehow, after reading the Bible carefully, I couldn’t dismiss the idea that God never makes a mistake. Somehow, deep inside me, I knew that the author’s words aligned with Scripture. Somehow, I believed this was life-changing truth. And so, I proclaimed my convictions to the group, even while I did not yet fully understand them.

Why Did My Son Die?

A few weeks later, I was asked to put my words to the test. At a routine 20-week ultrasound, we learned that our unborn baby, Paul, had a life-threatening heart problem that would require surgery. I told myself and others that God never makes a mistake. I repeated those words until they became part of my vocabulary. In an inexplicable way, God’s peace came while I declared those words, words that enveloped me throughout the pregnancy.

Paul had a successful surgery at birth and was thriving. But almost two months later, he died unexpectedly because of a doctor’s inattention. Though we were numb, my husband and I spoke at Paul’s funeral, reiterating that God never makes a mistake. We’d been helping each other find hope in the Lord through those words.

At the time, I meant those words sincerely, but weeks after Paul’s funeral, those same words once again seemed hollow and trite. Why did Paul die? Why did God permit this? This was because of a doctor’s negligence — hadn’t God made a mistake this time?

Theology — all of it — seemed empty and wooden to me. None of it made sense. The words would ricochet inside my mind and land nowhere. I didn’t know what to think or how to pray. So I didn’t. And I drifted from God.

Months later, God graciously drew me back to himself. While sobbing in my car, I encountered the radical love of God and I saw the rock-solid truth in the words I had pushed away. They were words I could build my life on. Words that could carry me through the darkest days. God had not made a mistake in making Paul, in giving him to us for a time, and in taking him back to himself. All of Paul’s life was filled with divine purpose.

After Paul’s death, I read Joni Eareckson Tada’s book When God Weeps, which further helped me see the importance of believing in God’s sovereignty. Joni says,

Either God rules, or Satan sets the world’s agenda and God is limited to reacting. In which case, the Almighty would become Satan’s clean-up boy, sweeping up after the devil has trampled through and done his worst, finding a way to wring good out of the situation somehow. But it wasn’t his best plan for you, wasn’t plan A, wasn’t exactly what he had in mind. In other words, although God would manage to patch things up, your suffering itself would be meaningless. (84)

“My suffering had meaning. All of it. I was living God’s plan A.”

Like Christenson’s chapter title, Joni’s words hit me hard. My suffering had meaning. All of it. I was living God’s plan A. Embracing and understanding her words changed my perspective on life, giving me strength to press on through the darkest trials, looking for God’s hand, grateful that my pain had a divine purpose.

Even in My Nightmares

God never makes a mistake. The phrase has shaped and reshaped my life and has anchored me through many storms. I clung to it when I was diagnosed with post-polio syndrome. And I kept repeating it after my first husband left us.

I needed the assurance that God was with me in my trials. The assurance that even when my nightmares came true, God had not made a mistake. He would use even my most dreaded outcomes for my good and his glory. Christenson says,

This is the place you reach when after years and years of trials and difficulties, you see that all has been working out for your good, and that God’s will is perfect. You see that he has made no mistakes. He knew all of the “what if’s” in your life. When you finally recognize this, even during the trials, it’s possible to have joy, deep down joy. (89–90)

I didn’t have a category for that kind of faith or perspective when I first read those words years ago. But now, over twenty years later, I am grateful for them. Grateful that the same God who walked with Evelyn Christenson through the various trials in her life, and taught her how to pray, has walked with me and taught me as well.

Most of all, I’m grateful to know that Jesus, who died that we might live, who loves us with an everlasting love, and who cares about every minute detail of our lives, will never make a mistake.