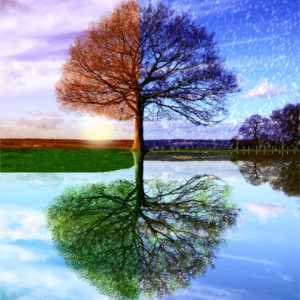 This article was written by Cally Logan and published by Crosswalk

Throughout our lives, we find that just as the seasons change in nature, they change in our own lives too. These seasons can be marked by milestones such as marriage, a new child, a move, or appearing more subtly as they turn the corner. How can you know if God is preparing you for something brand new?

Feeling Within Your Spirit

The call to become sensitive to the winds of change is breathed throughout Scripture. Isaiah 43:19 extends, “See, I am doing a new thing! Now it springs up; do you not perceive it? I am making a way in the wilderness and streams in the wasteland.” God does not desire for us to dwell in the past or the former things. Rather, He wants us to be in tune with His Spirit in the present, with an awareness that He is actively moving in our lives and situations. If you have recently felt a stirring that the Lord is up to something, more than likely, you are correct. For God delights in moving in the lives of His children to remind us of His hand in our lives. Vulnerably go before the Lord; ask Him if what you are feeling is from His heart and how you should respond in action or watchful anticipation next.

Another indicator that a new chapter is making its way towards you is that you may find your friend groups, relationships, or dynamics changing. This is not by your own hand or manipulation but rather a natural progression towards something shifting. You may find that you don’t feel as drawn to the people you once spent ample time with. This is because as you enter into a new chapter of your life, those who walked with you in the previous may not be coming in or may be in a different role. Consider those in the Bible. For a season, the Apostles of Christ were together all the time. After Jesus ascended, they were sent on their separate missions into God’s calling for them as individuals. Some companions are meant for the entire journey, but some just a portion of it. Be mindful to ask the Lord to your conscience that those you keep company with are those He has for you. 1 Corinthians 15:33 reminds us that the company we keep is important, for it can greatly impact how we conduct our own lives. There is great freedom in knowing who God has for you in each season. Rest assured that if He moves someone from your innermost circle, there is a purpose that He intends to fill moving forward.

Purging of the Old, Making Space and Room

Before heading into a new season, there is often a call to let go of something or make room so that something new can come in. This could manifest itself by letting go of possessions, making more room in the literal space you are in. Often our physical surroundings have implications on our emotions in having room to breathe. In the same vein, we will often find ourselves called to purge former habits. What was permissible for one season may not be beneficial in the next, but trust that it has a greater purpose if God calls you to let go of something. I served for many years in a Church ministry that brought great joy to my life, but it was often taxing by emotion and time. After several years it was clear to my own heart that God was moving me towards making space and letting go, and in that, He called me to let go of a group that had been such a large part of my life for so long. By stepping out in obedience after testing and confirming it was His will showed me that it was highly intentional. A few months after, the Lord began a new adventure in my life and calling that would require the space I had just made. Had I not been obedient when He asked me to, there would not have been the space for the newness God wanted to bring in. Trust that if He asks you to let go of something, there is a reason. He is faithful and is worthy of our trust.

A seed coming up from the ground and slowly sprouting is a great picture of the emerging process of spiritual growth. Spiritual growth and connection with the Lord are some of the most significant indicators of venturing into a new season. He does not desire for us to remain as babies spiritually. 1 Peter 2:2 shares, “Like newborn babies, crave pure spiritual milk, so that by it you may grow up in your salvation.” Just as babies begin on milk and grow as much as they can on milk to then require solid food for more growth, so are we spiritually. We are not meant to remain in the place of milk and milk alone, for we were made to grow into those higher levels. If God is calling you into a new season, it can feel like you are stepping up to that higher level. With that comes a deeper understanding of Scripture and more of a relationship with the Father. This is a great joy, a great honor, and truly what you were called and made to do as a follower of Christ. In John 10, it speaks of how the sheep “know” the voice of the Good Shepherd as translated from the Greek word, “oida” or “to know.” This word means to recognize or identify, but the verse goes deeper into how the Shepherd knows the sheep, or “ginosko,” which also means “to know” but in the way of richly, personally, and intimately knowing someone. As we grow spiritually, we come into the ginosko way of relationship with our Creator, which is beautifully marked as we embark on the path He leads us on.

Spiritual Opposition from the Enemy

Often, you will also find that the Enemy seeks to rattle you before you step into a new season through spiritual warfare. Those attacks are often insidiously targeted towards your ability, identity, or faith in God’s ability moving forward. Remember that the thieves do not break into empty houses, so if the Enemy is attacking you, it is because there is something within you he wants to steal, destroy, or ruin. Don’t let the Enemy have a foothold. Remember James 4:7, “Submit yourselves, then, to God. Resist the devil, and he will flee from you.” Do not try to outwit or out talk the devil, instead submit to God and resist the Enemy’s ploys. You are a beloved child of God, and we have a powerful intercessor right there ready to come alongside us and cover us when those attacks come about. Do not let the Enemy steal what God has for you, for it is not his for the taking.

In my own path, I have recently found myself in a season of preparation for something new. It began several months ago when in prayer, I felt the winds of change beginning to stir. Through prayer, I felt moved by the story of Esther. She was a woman of God who spent a year in preparation for what she would be called into in her own life of starting as a commoner to later becoming queen. In order for her to be ready for the role, she would serve not only as the queen but as an advocate for the people of God. She needed the training, the coaching, and the skills built up in her to be ready for what her role and new season would require of her. For the past several months, I found myself in a place where God has been adjusting aspects of my life, calling me to hand over control of certain areas and to trust Him ultimately. Just as Esther had to go through the year of preparation for her new role and season, God had me in my own time of getting ready for something new. Whether it is serving as queen and an advocate for God’s people or preparing for a new role in life, God works to equip the called. What is required of us is not only our obedience but to trust Him along the way.

Just as warmth comes peeking its way through on winter days to remind us of spring ahead, so do urgings of something new seasonally for our own lives. Go before the Lord and inquire of Him if He is getting you set up for a new season and what that may look like ahead of time. Trust His leading and hand, and believe that what He has planned will truly be for His glory and your benefit.
Posted in Blogs