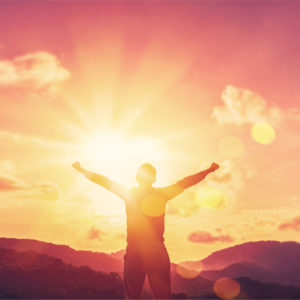 This article is by Joel & Victoria Osteen

It’s interesting that when God speaks about us in Scripture, we often don’t feel like the person He’s talking about. He speaks about us as if we’re already the completed person He’s making us into. For instance, He says that you are His masterpiece, created anew in Christ Jesus, so you can do the good things He planned for you long ago (Ephesians 2:10). Is that how you see yourself? He says that in all the things you face today “you are more than a conqueror through Him who loved us” (Romans 8:37). Despite however you may feel to the contrary, God sees you in your wholeness and has declared that you are more than a conqueror through Christ Jesus already.

This reminds me of a boxer I heard about whose world-renowned trainer developed him into a world champion. Before every match the trainer would write the number of the round he predicted this boxer would knock out his opponent and slip it into the boxer’s glove. It wasn’t whether or not he was going to win, but when he would win. That little note instilled so much confidence in the boxer that he developed a champion’s mentality, reminding him of the champion inside. But the truth is that little note had no effect until it became a part of the boxer’s thinking, a part of who he was.

In the same way, God is certain of your ability to succeed. Did you know that God has placed in your glove, so to speak, the seed of a champion? On the slip of paper He’s already written that you are more than a conqueror through Christ Jesus. He’s already given you the seed that is going to be developed to cause you to overcome every challenge. Because Jesus Christ already conquered, He has set you free from sin and bondage and gives you the power to conquer. God has put inside you the same power that raised Jesus from the dead. He is saying, “It’s not whether or not you will win. It’s only a matter of time before you deliver that final blow and knock out the enemy.”

But just like the boxer, you have to get this into your thinking. You may not feel like a champion. You will become more than a conqueror when you activate that seed of greatness by what you think, by what you say, by how you praise, by how you respond to the power of God. You are living out your destiny right now. Don’t let the enemy tell you that you’re less than a conqueror. God says you are a champion.

You have the Champion living inside you. Rise up and be the champion!