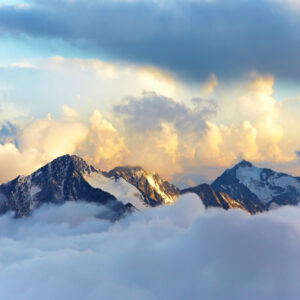 In 1977, California pastor Jack Hayford and his wife visited England during the Silver Jubilee (25th anniversary) of Queen Elizabeth’s accession to the throne (1952). They were struck by the grandeur of the celebration, and the manifest joy of the people in their monarch. While there, they visited Blenheim Palace, birthplace of Winston Churchill, and famous for the magnitude and stateliness some Americans today know only through watching Downton Abbey.

Driving away from the palace, overcome with awe, Hayford found himself reaching for words — language that would transpose the weight of the earthly experience into the key of heaven. As he stretched, the word that seemed most fitting, both to describe the stunning magnificence of the palace, and how it pointed to the superiority of the reigning Christ, was majesty. According to a California newspaper’s retelling of the story,

As the Hayfords pulled themselves from that regal palace and drove away, Dr. Hayford asked his wife to take a notebook and write down some thoughts that were coming to him. He then began to dictate the lyrics, the key, and the timing to a song now being sung by Christians worldwide. (“Story Behind the Song: ‘Majesty,’” St. Augustine Record, August 13, 2015)

Hayford’s impulse to reach for the word majesty, however much he knew it at the time, was profoundly biblical. Majesty is indeed a frequent, and carefully chosen, attribute in Scripture of the living God — a trait often overlooked in studies of the divine attributes, but an important witness of both the prophets and apostles, one that sheds brilliant light on other well-rehearsed attributes, and one that is truly, deeply, wonderfully fit for worship, as Hayford intuited:

Majesty! Worship his majesty!
Unto Jesus be all glory, honor, and praise.
Majesty! Kingdom authority,
Flow from his throne, unto his own;
His anthem raise!

Those, like Hayford, who reach for the word majesty often find themselves standing before, or remembering, some natural or manmade wonder that is both imposing and, at the same time, attractive. In our language, as in biblical terms, the word captures not only greatness but also goodness, both bigness and beauty, awesome power together with pleasant admiration.

Mountains might be the quintessentially majestic natural feature. Psalm 76:4 declares in praise to God, “Glorious are you,” and then adds, “more majestic than the mountains.” Alongside the illustrious plain of Sharon, which had its own peculiar glory, Isaiah’s hope-filled prophecy of future flourishing for God’s people hails “the majesty of [Mount] Carmel” (Isaiah 35:2). Yet alongside mountains, we also might attribute majesty to gold, or some precious material or gem, fit for a king, that dazzles the eye with its beauty, as Job 37:22 links God’s “awesome majesty” with “golden splendor.”

Not only natural phenomena, but also the work of human hands, when on a grand scale, might have us reaching for majestic. Lamentations 1:6 mourns the loss of such civic majesty after the destruction of Jerusalem by Babylon, and not long after, Nebuchadnezzar, Babylon’s king, professes to have built his city “by [his] mighty power as a royal residence and for the glory of [his] majesty” (Daniel 4:30) — this, just before his great humbling.

How, then, does the common use of majesty for mountains and mansions, gold and cities, relate to attributing majesty to God?

What Is Divine Majesty?

In bringing together both greatness and goodness, both strength and beauty (Psalm 96:6), majesty is not only a fitting term for mountain majesties but a particularly appropriate descriptor of God, who is, above all, “the Majestic One” (Isaiah 10:34).

At a critical juncture in the history of God’s first-covenant people, as they assemble under the leadership of Solomon, to dedicate the temple, the king prays, in his great wisdom, “Yours, O Lord, is the greatness and the power and the glory and the victory and the majesty.” Consider those first three — greatness, power, and glory — often associated with majesty elsewhere, as revealing angles into the attribute of divine majesty.

His Is the Greatness

First and foremost is greatness.

The opening verse of Psalm 104 declares, “Bless the Lord, O my soul! O Lord my God, you are very great! You are clothed with splendor and majesty.” Likewise, after their dramatic God-wrought exodus from Egypt, God’s people sing, “In the greatness of your majesty you overthrow your adversaries” (Exodus 15:7). Later in Babylon, as Nebuchadnezzar tells of his great humbling, and restoration, he speaks of his “majesty” returning to him “and still more greatness was added to me” (Daniel 4:36; see also 5:18). Micah’s famous Bethlehem prophecy tells of a majesty that is greatness in one coming who will “stand and shepherd his flock in the strength of the Lord, in the majesty of the name of the Lord his God. And they shall dwell secure, for now he shall be great to the ends of the earth” (Micah 5:4).

“God has not only the might to rule, but also the right.”

Majesty often connotes some greatness in size, as with mountains and mansions: Ezekiel speaks of “majestic nations,” once numerous and powerful, but now humbled by God (Ezekiel 32:18). But that greatness also can include God’s divine right and prerogative, as God, to rule and do as he pleases. As Solomon prayed, “Yours, O Lord, is the greatness and the power and the glory and the victory and the majesty, for all that is in the heavens and in the earth is yours” (1 Chronicles 29:11). God has not only the might to rule, but also the right.

His Is the Power

Not only does Micah 5:4 connect God’s majesty with divine strength in shepherding his people, but Psalm 68:34 forges the bond even stronger:

Ascribe power to God,
whose majesty is over Israel,
and whose power is in the skies.

“Awesome,” says David, “is God from his sanctuary.” He is majestic not only in the power he possesses, but also in the power he generously gives: “He is the one who gives power and strength to his people” (Psalm 68:35). So also in Psalm 29:4, we hear,

While his powerful, majestic voice relates to the audible, the apostle Peter testifies of it becoming visible in God’s incarnate Son: “We did not follow cleverly devised myths when we made known to you the power and coming of our Lord Jesus Christ, but we were eyewitnesses of his majesty” (2 Peter 1:16).

His Is the Glory

Of greatness, power, and glory, ties are deepest with the third. Psalm 8, Scripture’s signature celebration of the majesty of God, manifestly sings of glory — God’s glory, set above the heavens (verse 1), and man’s glory, from God, as one he has “crowned . . . with glory and honor” (verse 5). And so that memorable opening line, reprised as the final note, hails the majesty of God’s name:

As we’ve seen in Psalm 76:4 (“Glorious are you, more majestic . . .”), divine majesty is so closely connected to divine glory that we might even see the word majesty as providing God’s people with further language for expressing, commending, and marveling at his glory and beauty. Along with splendor (frequently paired with majesty), the term expands our vocabulary for glory.

Our God is so great, so admirable, so wonderful, so awesome in the eyes of his people, and so fearsome to his enemies, that the Hebrew kavod, Greek doxa, and English glory will not suffice. That is, not for his worshipers. We need more terms. We press more words into service. As we seek to keep speaking of him in his beauty, his power, his greatness, his glory, we grope for language: dominion, authority, splendor, majesty. At times, we even pile words upon words, as Psalm 145:5 does with “the glorious splendor of your majesty.”

Majesty, in particular, is emotive, or affective. It indicates greatness in sight or sound that is also wonderful. Bigness that is beautiful. Imposing size that is viewed with delight, imposing power received as attractive. While having significant overlap with divine dominion or lordship, majesty does more. Dominion and lordship are more technical and prosaic; majesty rings more poetic, with the awe of worship.

Meditate on His Majesty

In the end, it may be majesty’s poetic ring that makes it such a precious word, and fit for worship. As Jack Hayford groped for language to voice the wonder rising in his soul far beyond the legacy of English tradition and the largesse of its palaces — that is, reverence for the living God — majesty came not as a technical, functional, denotive term. It had a feel. It communicated soul-expanding awe. It was a mouthing of worship.

“God is not only great but good — good in his greatness and great in his goodness.”

The choice of the word majesty, then, says something about the speaker. Majesty attributes not only greatness, power, and glory to some object, but signals awe and wonder in the one who chooses the word. God’s friends, not his foes, declare his majesty. In Egyptian eyes, God was not majestic at the Red Sea but horrific. His striking size and strength were not for them but against them. But in the eyes of Israel, in the sight of his people, their God was indeed majestic in his greatness and power, and worthy of praise for terrifying and wiping out their enemies (Exodus 15:7, 11).

Perhaps you find yourself in need of fresh language for attributing greatness, and power, and glory to the God whom you worship in Christ. He is not only great but good — good in his greatness and great in his goodness. He is not only big, strong, imposing, indomitable, omnipotent; he is beautiful, attractive, stunning, compelling, glorious. He is the Majestic One, who delivered Israel at the Sea, and his church at the cross. And so, we say with the psalmist, “On the glorious splendor of your majesty, and on your wondrous works, I will meditate” (Psalm 145:5).

And we worship his majesty.