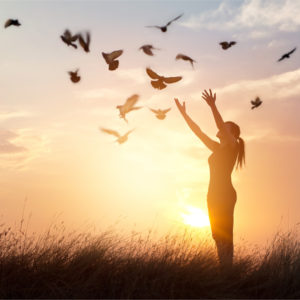 This article is by Joel and Victoria Osteen

I would like to share an incredible story of the power of forgiveness with you. And the best part is, this same power is available to all of us today, the “mighty power that raised Christ from the dead” (Ephesians 1:19–20, TLB). This power is yours because Jesus Christ arose from the tomb on that first Easter morning!

Nothing is more amazing or significant than the power displayed at the Resurrection. This is what separates our faith from any other on earth. Jesus paid the ultimate price for our sins on the cross. He lived a perfect and sinless life and gave it as a sacrifice for your sins and mine. And when all hope seemed to be gone He miraculously came to life again. What this means is:

When we accept Him as our Lord and Savior we are completely forgiven … for anything … for everything … forever!

The story begins with a boy when he was only 14 years old. His father was abusive and eventually the relationship erupted into a terrible fight. When it was all over the dad kicked his son out of the house.

That night all alone, this young boy was devastated, discouraged — his life seemed shattered. He had no place to go, and he finally decided that life just wasn’t worth living. So, having lost all hope and having no one to turn to, he went to a big bridge and prepared to jump.

But just as he was about to jump, he heard a voice that said to him, “Don’t do it! I’ll be your father. I’ll be your protector. I will guide you throughout life.” All of a sudden, he sensed warmth all over his body, from his head to his feet. And he felt a love that he had never experienced before. What he was feeling was the unconditional love and acceptance of God. It was the love that the Bible promises: “Even if my father and mother abandon me, the LORD will hold me close” (Psalm 27:10, NLT).

From that moment on, this teenager who suffered so much rejection, hurt and pain made a decision that would change the course of his life.

He decided that he wasn’t going to hold a grudge against his father. He wasn’t going to allow bitterness and unforgiveness to take root in his heart. Although he did not see his dad, he forgave him and let all the pain and hurt of his past go, and as he moved forward in hope and forgiveness, God began to supernaturally restore him.

Today, some 22 years later, this young man is a minister of the Gospel of Jesus Christ. He was in the pulpit one Sunday when out of nowhere, his father walked into the auditorium. The young man hadn’t seen his dad since that night when he was kicked out of his home. But at the end of that service, during the altar call, his dad came down with big tears running down his face. He not only asked his son to forgive him, but he asked Jesus to be the Lord of his life.

There must have been a lot of rejoicing in heaven that day, because the Bible says, “Heaven will be happier over one lost sinner who returns to God than over ninety-nine others who are righteous and haven’t strayed away!” (Luke 15:7, NLT).

So I have good news for you today. No matter where you are in life, what problems you may struggle with, no matter what you have done in the past, or what someone else has done to you, Jesus is able to wipe the slate clean. You can experience that same power of the Resurrection. The power to be forgiven and to forgive. Jesus is alive — and He wants to live in and through you today — that is what Easter is all about.

You may be in a relationship that has been dead for years, like this young man I told you about. You may be feeling the pain of negative words spoken over your life, or maybe you’ve spoken to someone else and you wish you could take back. Maybe there are things in your past that you think can’t be forgiven. Or maybe you feel guilt for some past failure or resentment and unforgiveness toward someone who has wronged you.

Whatever your need may be, let God meet it! Allow the power of His forgiveness to sweep across your heart and life and make everything new.

I want to help you rediscover that power in a new, fresh way — so you can experience hope, peace, joy and victory in every area of your life.

God is not waiting for you to become a better person before He forgives you. Jesus paid the price on the cross for all our sins — “while we were yet sinners Christ died for us,” the Bible says in Romans 5:8. He did it simply because He loves you and wants to have a relationship with you.

And the result of this astounding, unconditional love and total forgiveness is that we no longer have to live under the condemnation and guilt of sin. We can live the abundant life that Jesus talked about — a life full of hope, a life of purpose, a life of unlimited potential.