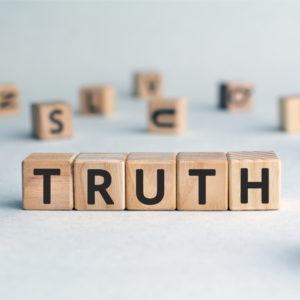 The recent swell of concern for truth, at least as a word choice, is an interesting development. Even voices that recently declared with seeming delight the dawning of a “post-truth” age now find themselves reaching for this ancient word. Freshly sensitive to the lies of perceived foes on “the other side” of the political divide, amateur politicians, conservative and progressive, with smartphone in hand, represent themselves as bearers of the real truth.

Whether it’s social distancing and face coverings, crime rates and policing, big tech and big government, inflation rates and national debt, court cases and judicial appointments, it turns out we still want the truth. No, we demand the truth. That is, when it favors our personal interests and preferences.

Take It in Stride

New as the recent trend of shameless spin, and outright lies, may seem to some, Christians with Bibles in hand do not number ourselves among the surprised. Long has the devil trafficked in half-truths, subtle deception, and “disinformation” — from the beginning, in fact. This has been his strategy, and main trick, as “father of lies,” from the garden. Even if the social manifestations now appear plainer and, at times, more jarring, those informed by the truth of Christian Scripture take it in stride.

Two millennia ago, one of our apostles informed us that unbelievers “suppress the truth” and “exchanged the truth” for lies (Romans 1:18, 25). Even in the early church, former professors of the faith wandered away from truth (2 Timothy 4:4; Titus 1:14; 3 John 12). Set over and against the 1950s, our (digital) world(s) may seem newly thick with slander, flattery, and self-promotion. But compared with the early church, well, we may now be living in more normal times.

Our Jesus as Truth

As Christians, our concern for truth, in times of shameless deception, is not just principled; it’s personal. We care about truth, and resolve to speak truth, despite its costs, not simply because we’re concerned with fact and fiction, true and false. Lowercase, impersonal truth is not our highest and deepest allegiance. Our concern “for truth” is derivative and secondary. We have come to know the higher Truth, the deeper Truth, the personal Truth who gives meaning and value to other truths, and makes some claims true, and others false. Apart from him, the seemingly dignified public plea for truth soon devolves into another language game and cunning power play.

“Jesus is not just true among other truths, but the Truth — the one way to the one who truly matters.”

John’s Gospel is particularly insistent on Christ, as divine Son, not only being true, but the Truth. Jesus himself, of course, says famously to his disciples, “I am the way, and the truth, and the life. No one comes to the Father except through me” (John 14:6). He is not just true among other truths, but the Truth — the one way to the one who truly matters.

When John, in his dramatic prologue, introduces this personal, incarnate Truth, he presents the person of Christ as “full of grace and truth” (John 1:14, 17), echoing the great, defining Old Testament refrain about God’s “steadfast love and faithfulness.” In Christ, we will never be done marveling that “God chose to make himself known, finally and ultimately, in a real, historical man,” as D.A. Carson comments (John, 127). He continues,

Jesus is the truth, because he embodies the supreme revelation of God — he himself “narrates” God, says and does exclusively what the Father gives him to say and do, indeed he is properly called “God.” He is God’s gracious self-disclosure, his “Word,” made flesh. (491)

Our Gospel as Truth

First, we recognize Jesus as the Truth. Then, as we page our way through his apostles, we find that not only is Christ himself “the Truth,” but the message about him and how he saves — what we call “the gospel” — is “the truth.”

Thanks to Paul’s epistles, this definitive message of the Christian faith is the most common referent of “the truth” in the New Testament. Paul refers to our hearing “the word of truth, the gospel of your salvation” (Ephesians 1:13; also James 1:18) and “the word of the truth, the gospel,” that is, “the grace of God in truth” (Colossians 1:5–6). And so, Christians are those “who believe and know the truth” (1 Timothy 4:3). We have come “to a knowledge of the truth” (2 Timothy 2:25) — meaning not truth in general, whether mathematics or physics or chemistry, but specifically the truth, the good news from God that Jesus saves sinners.

In perhaps Paul’s most significant statement about the new-covenant people of God, he refers to us as “the household of God, which is the church of the living God, a pillar and buttress of the truth” (1 Timothy 3:15). The call of Christ on his church, which he himself builds (Matthew 16:18), in the best of times and worst, is not fundamentally to stand for all that’s right and true and good in the world. Churches are not societies for the preservation of fact and general truths. Churches are to be pillars and buttresses — for the advance and defense — of the gospel, the truth, the defining message about the one who is the Truth.

The pursuit and telling and upholding of truth is, then, no mere pragmatic concern, nor some secondary religious conviction. It is a worship concern, stemming from our ultimate allegiance. We worship the one who is Truth himself. And we receive the gift of right standing with God, in him, by faith, through the truth of the gospel.

As we stand for truth in times teeming with lies, we may find some common cause with unbelievers in the various spheres where God has placed us — in our families, neighborhoods, schools, and workplaces. In days when dividing lines are being newly redrawn, new fault lines emerging, and once secondary concerns becoming primary, we will find non-Christian cobelligerents, old and new. As we do, we would do well to remember that the deepest allegiances beneath this cooperation are not the same, but, in fact, fundamentally different (and even set against one another).

We care about truth not because truth is our God, nor because “truth” now seems to serve our own interests, but because Jesus is our God, and he is the Truth. He’s the Truth who makes all truth to be true. In Christ, we will not be content with dedicating our lives to truth but not the Truth. And so we beware letting unbelievers in common cause turn our pursuit of truth upside down by rallying us to their focus as long as we keep quiet about ours.

In times like ours — disillusioned and divided by lies, and freshly desperate for truth — we can find strength in rehearsing three ancient allies we have in the Christian call for truth, true friends that help us not stay silent about what matters most.

First, we recall that not only is Truth himself personal, but we too have had a personal encounter with him. We are not just professors of truth, but witnesses, personal witnesses, to him and his work in us.

Witnesses speak of “what we have seen and heard” (Acts 4:20) — we speak of more than our experience, but not less. This puts importance on our personal testimonies in a way we might be prone to neglect in the cause of truth. Our professing of truth is not speculative or secondhanded, but like the formerly blind man healed by Jesus, we can say, in a world of complexity, confusion, and spin, “One thing I do know, that though I was blind, now I see” (John 9:25). Which at once inspires both a courage and contrition in our contending for the faith — and may help us discern which causes to take up and which ones to let pass.

So too, secondly, we care for truth as those who have an almighty Ally for the Truth, the Holy Spirit. In a world long embattled in a contest for the truth, Jesus promised, and has given us, an all-powerful Helper who is “the Spirit of Truth” (John 4:23–24; John 14:17; 15:26; 16:13). The Spirit loves the Truth. The Truth himself has sent him, and the Spirit is dedicated utterly to the Truth, with omnipotent energy. The pursuit of truth is not our work to start, shoulder, and carry out with his help. Rather, it is his great work for us to join and enjoy, without panic or frenzy.

Finally, however alone we might feel in a moment of personal attack or impersonal doom-scrolling, or however small our circle of believing friends or local church may feel, we have a people — and far, far more than seven thousand who have not bowed the knee. None of us stand alone contra mundum as lovers, and testifiers, of the Truth.

The church, pillar and buttress of the truth, is also our soul-steadying fellowship in the Truth. In a world of half-truths and shameless lies, we tell the truth, and love the truth, and pursue the truth, because we love and cherish and worship together the one who is Truth.