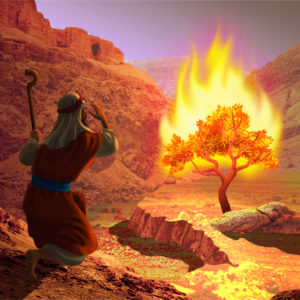 This article is by Aaron Brown and published by Crosswalk

There’s an expression in the English language that goes something like, “She’s on fire.” The woman being mentioned, whatever she is doing, is performing the task well.

The fire communicates an intensity to the action. Sometimes Christians describe their faith as being “on fire.” Such an expression is appropriate considering the ways fire is evoked in the Bible.  Some of which would appropriately describe faith.

One particular instance occurs in the Book of Exodus where Moses, prior to becoming a renowned figure throughout the ages, encountered a burning bush. Though this was no ordinary brush fire. This bush was set aflame by a divine presence. On that sacred ground is where Moses encountered the great I AM. The moment marked a change in his life where God would ignite his faith, giving him a charge to lead others with a God-ordained purpose.

There are lessons for the modern-day believer in this story. Lessons that are important for any believer throughout history. We will examine 3 important lessons from Moses and the burning bush after taking time to understand the context of this event.

What Happens in the Story of Moses and the Burning Bush?

We read about Moses and the burning bush in the third chapter of Exodus. The passage opens with a description of Moses serving as a shepherd for his father-in-law’s sheep. Moses takes the flock of sheep into the wilderness and comes upon a mountain called Horeb. While fulfilling an ordinary duty, something very unusual happens – a bush catches fire. Just one bush. Moses is no stranger to fire, but a single bush burning likely strikes him as odd. Even stranger, Moses quickly observes that the fire was not destroying the greenery.

“So Moses thought, ‘I must go over and look at this remarkable sight. Why isn’t the bush burning up?” (Exodus 3:3).

The fire is initially depicted as being started by an angel of the Lord. Once Moses takes notice of the bush, however, that is when God starts speaking to Moses. When God speaks to his servant, He calls Moses by name. In fact, he calls Moses’ name twice! To this personal acknowledgment, Moses responds in kind. He readily presents himself to God.

From there God starts giving Moses instructions. First, he has to remove his sandals because the ground is sacred, possibly because of what just occurred with the burning bush. God then speaks to Moses and tells him that He is the God of his forefathers. He also calls them by name: Abraham, Issac, Jacob. God says that He knows His children are suffering in Egypt. He hears their prayers and He has an answer.

Surprising to Moses, he is God’s answer. He is the solution to the Israelites’ suffering. God gives Moses a command–go to Egypt and make a case before Pharaoh so that the Jews would be freed.

So Moses rebuttals, expressing this self-doubt. In reply, God does not relent in His command. Instead, God affirms what He has called Moses to do. The conversation plays out as though a father is talking to a son. The son has doubts, but the father reassures him that he is capable. In this situation, God reaffirms Moses that He will be with him during this journey (Exodus 3:12). However touching and relatable the dialogue is, Moses is having this conversation with God through the burning bush. This is a divine miracle, a supernatural occurrence,

As God chose to speak to Moses through the bush instead of through standard prayer, we can be sure there is symbolism and important lessons to take away from this story.

Moses and the Burning Bush: The Nearness of God

God drew near to Moses in this story. He made His presence known. Moses accepted that nearness when He in turn presented himself to God. This story, like others in the Bible, speaks to God’s omnipresence. He finds us where we are even when we don’t know where to find Him, or if we don’t even think to look.

What’s more, God manifested Himself through a burning bush. God chooses how He will make His presence known. For something this monumental, Moses’ mission, God appeared as something extraordinary. We know that God’s presence with Moses is not limited to the bush when He tells Moses that He will be with him during the journey. Moses is not alone, and in fact, never was alone. From the moment he woke up to the moment he journeyed to Horeb and saw the burning bush, God was with him.

Today, we can apply this knowledge to our own lives by recognizing that God is present with us daily and throughout the day. He sees us wake and sees us sleep. God also has the power to make His presence known in a not-so-subtle way. Moses encountered a burning bush, but we may find ourselves faced with unusual circumstances, or maybe spot a billboard sign, or a cloud, something that informs us God is present and He is calling us.

God gave a command to Moses, a divine calling or vocation. Despite Moses doubting himself, God’s command stood. And as the rest of Exodus reveals, God kept His word. He always does. What Moses’ story informs readers is that God gives His children purpose. That purpose may be something we feel unqualified to do, but God has a plan. God’s plan for Moses was not thought about on the spot. God gave him a task that was already calculated.

Whatever Moses did not have, God would supply him and he did. The same is true for Christians today. Sometimes we will be called to do things we do not feel excited about or capable of fulfilling. Yet, if God knows we can, why can’t we believe in ourselves? The implication is that God doesn’t know as much as us if we doubt His calling on our lives.

What we should do instead is humble ourselves before God, and ask Him how to best go about fulfilling our vocation.

Moses and the Burning Bush: Trust over Doubt

Moses was not perfect in his relationship with God. In this chapter he doubted, then again later in Exodus he doubted. This later doubt led to his brother Aaron serving as the voice for the people. Moses acted as interpreter. Though he was imperfect in his faith, Moses did display a great deal of trust in God. He was given a major task that likely seemed impossible by human standards. He was supposed to free a whole nation from slavery.

Whatever doubts crossed his mind during the adventure, Moses maintained his relationship with God. He acted on the Lord’s behalf even when met with opposition.

We must work to showcase this same level of trust and God, and ideally, more trust than Moses accomplished. If we see that God can do great things through one man, what can He do through us? Moses doubted because he looked at the circumstances. When he managed to trust, he looked to God. We should do the same.

Is God speaking to you today, through a person, a sermon, a message on a billboard? Is God calling out to you by name to serve Him? Moses shows us that God can reach us wherever we are and whomever He chooses. God can perform the simplistic and the extraordinary, on His own and through His people.

Moses ran into obstacles, some that were predetermined, others He created himself through his doubts. In all instances, God helped him. God never left his side.

We should feel encouraged to know that God will support us in whatever He has called us to accomplish. Just as He calls us by name, He gives us each a vocation. We simply have to answer Him and say, “Here I am, Lord.”