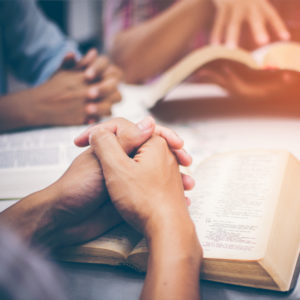 This article is by Mel Lawrenz and published by BibleGateway

The gospel writers make it clear that one of the outstanding features of Jesus’ ministry was that he freely and naturally exercised this authority. People sensed that they were under the immediate influence of God. Jesus’ words struck at the heart; they were clear, strong, unequivocal, simple, and mysterious. They both wounded and healed, and when they did wound, they offered immediate healing as well. His words still stick in people’s minds and keep moving across the landscape of history like a cyclone. That’s why almost everybody, including even proponents of other religions, show respect for the thunder and lightning of Jesus’ teaching.

But showing respect is one thing; responding is another. In the Sermon on the Mount Jesus talked about one man who built a house on a rock foundation and another whose house rested on a bed of unstable sand. The house-on-sand person hears Jesus’ words only, whereas the house-on-rock person hears and practices. Respect plus response. It was right after this tale of two builders that Matthew mentions the people’s astonishment at Jesus’ authority. The people were not saying, “Did you hear what this fellow is trying to assert?” They were swept up in the power of the Word himself. His authority carried them, and it carries us still. It summons us not just to listen, but to act.

House building is a metaphor for life. Christ does not assert authority so that he can push his weight around. God doesn’t impose commands so that he can have a bevy of mindless followers. His is an act of grace. These authoritative words come to us because God knows there’s so much we need to learn about life. Ignorance may not be a sin, but it’s an extraordinarily dangerous way to live.

When someone asks, “Why should I believe what Christianity teaches?” or “Why should I believe the specific things taught about personal ethics, and life after death, and God’s providence in history, and angels, and failure?” the answer he or she deserves is that followers of Jesus Christ believe such things (knowing and trusting) because they believe they have heard an authoritative voice on the matters. Christ summons, and the oracles of prophets and the writings of apostles are Holy Scripture—the exhalation of God’s own Spirit.

That’s the reason why we need authority.

Frighteningly, many people today don’t care whether their beliefs line up with reality. If their beliefs have a pleasing or useful effect in life, then they go ahead and hold onto them. They don’t worry about whether they’re grounded in truth or not. It’s too much of a hassle to conform beliefs to the form of reality, and certainly inconvenient to risk conflict with someone else’s beliefs. Besides, these people ask, is there any such thing as truth, anyway?

But we all know, really, that we can’t live that way. We don’t live that way. When we receive a bank statement on our accounts, we assume the transactions line up with the reality of our actual deposits and withdrawals. In fact, we assume they line up precisely, that the balance is not a whimsical number a bank official decided to put on the statement. When someone is on trial for murder we assume the careful process of deliberation will produce a verdict that’s true. If a doctor tells you he believes a growth in your abdomen is completely benign and thus does not require surgery, you want to know that this is not an arbitrary opinion on his part because his schedule is too booked to fit in another surgery. You don’t want the doctor thinking, “I could believe it’s benign.”

But, some will argue, it’s different with religious beliefs because they’re not as objective as legal and medical and financial matters. We shouldn’t go looking for religious authority because no one should dare call anybody else wrong or have the audacity to say that you’ve found spiritual truth.

But if we’re honest, we’ve got to say there really is a Creator or there isn’t. And if there is a God and that God is perfection and goodness, then we believe because we must believe. It’s the only intelligent thing to do.