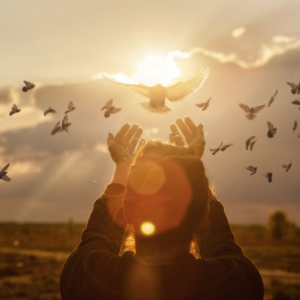 This article was written and published by Joel Osteen

There’s a battle taking place inside each of us. It’s a battle between the flesh and the Spirit. The flesh represents our carnal nature that shows out in ways such as jealousy, pride, and compromise. It’s the easy way to live. You just do whatever you feel and don’t have to be disciplined. If someone’s rude to you, you’re rude back to them. If you don’t feel like having a good attitude, you go through the day sour. You don’t think twice about eating your fourth piece of coconut cream pie. The flesh wants to rule and have control.

The Scripture says, “Those who live by the dictates of the flesh” (Romans 8:13). Notice that the flesh is described as a dictator that makes all the decisions for you. It tells you what to do and when to do it. You just follow orders. If you get stuck in traffic, your flesh will tell you, “Get upset. This is ruining your day.” If a coworker leaves you out of a meeting, the flesh says, “Get offended. This is not right.” The problem is that if you keep obeying the flesh, the verse goes on to say, “You will die.” That doesn’t mean physically, but your dreams will die, your relationships won’t flourish, and your gifts won’t come out as they should.

You’re letting the flesh win the war if you give in to temptations, laziness, and compromise. The option is to “walk in the Spirit.” That means that you do the right thing when it’s hard, you bite your tongue when someone’s rude, you stay faithful in your relationships when someone is trying to lure you away. What’s limiting some people is not that they’re not talented or don’t have God’s favor; it’s that they keep obeying the flesh. Don’t keep giving in to the same things that you know are holding you back.

The apostle Paul says, “The flesh and the Spirit are constantly fighting each other” (Galatians 5:17). Your choices are never free from this conflict. You have to know that this is a battle that will never go away. You can be a believer who has matured for fifty years, but you will still have to deal with the flesh. You don’t overcome it one time and it’s defeated. It will come back again. You have to get skilled at saying, “No, I’m not going to let my flesh have what it wants. I’m not going to let my guard down and give in.”

Are you winning the war within? Are you living by the Spirit, making decisions that honor God? Or are you letting the flesh win, doing whatever you feel? You need to take the flesh off the throne. Quit letting it determine your decisions.